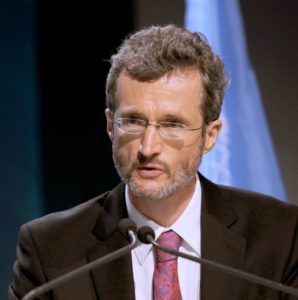 An interview with Georg Kell:


Georg is the founder and former Executive Director of the United Nations Global Compact, the world’s largest voluntary corporate sustainability initiative with over 9,000 corporate signatories in more than 160 countries.

As its founding Executive Director, Georg helped to establish the United Nations Global Compact as the foremost platform for the development, implementation and disclosure of responsible and sustainable corporate policies and practices. In a career of more than 25 years at the United Nations, he also oversaw the conception and launch of the Global Compact’s sister initiatives on investment, the Principles for Responsible Investment (PRI), and on education, the Principles for Responsible Management Education (PRME), together with the Sustainable Stock Exchanges (SSE) initiative.

Georg started his career as a research fellow in engineering at the Fraunhofer Institute for Production Technology and Innovation in Berlin. He then worked as a financial analyst in various countries in Africa and Asia before joining the United Nations in 1987. A native of Germany, he holds advanced degrees in economics and engineering from the Technical University of Berlin.

Georg has received numerous recognitions and has been named among the “100 Most Influential in Business Ethics” every year since 2011. 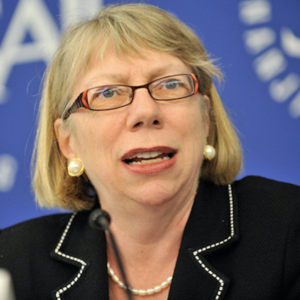 An interview with Barbara J. Krumsiek:


Barbara J. Krumsiek is a globally recognized leader in sustainable investing, with a professional background spanning four decades in the asset management field, including most recently as the CEO and Chair of Calvert Investments, Inc. During her tenure at Calvert from 1997 to 2014, Krumsiek helped to triple the firm's assets under management and developed Calvert Women's Principles, a global code of conduct adopted by the U.N. Global Compact and U.N. Women as the basis for the U.N. Women's Empowerment Principles. She additionally served as co-chair of the U.N. Environment Programme Finance Initiative from 2010 to 2012, a partnership between the United Nations and 200 global financial institutions mandated to develop and promote the links between sustainability and financial performance.

An interview with Professor John Ruggie:


John Ruggie is the Berthold Beitz Professor in Human Rights and International Affairs at the Harvard Kennedy School of Government, and an Affiliated Professor in International Legal Studies at Harvard Law School. In 2005, then United Nations Secretary-General Kofi Annan appointed Ruggie as his Special Representative for Business and Human Rights, a post he continued to hold under the UN administration of Ban Ki-Moon until the end of his term in June 2011.

At the close of his mandate, Ruggie presented to the UN Human Rights Council a set of Guiding Principles for Business and Human Rights. The Council unanimously endorsed the Guiding Principles, establishing them as the authoritative global reference point on this issue. Professor Ruggie served from 1997 to 2001 as UN Assistant Secretary-General for Strategic Planning to Kofi Annan. Trained as a political scientist, he has made significant intellectual contributions to the study of international relations and international law-making, focusing on the impact of economic and other forms of globalization on global rule making.

An interview with Dr Carolyn Woo:


Dr. Carolyn Woo currently serves as the President’s Fellow for Global Development at Purdue University. In 2016, she retired as President and CEO of Catholic Relief Services (CRS), the official international humanitarian agency of the Catholic community in the United States, having joined in 2011. Before her role at CRS, Dr. Woo served as dean of the University of Notre Dame's Mendoza College of Business where, during her tenure, the college was frequently recognized as the nation's leading business school in ethics education and research. Dr. Woo was the first female dean to chair the accreditation body for business schools, AACSB: Association to Advance Collegiate Schools of Business, and directed its Peace Through Commerce initiative. She also helped launch the Principles for Responsible Management Education for the United Nations Global Compact.

An interview with Yolanda Kakabadse:

Yolanda Kakabadse is recognised as one of the world’s most prominent environmental leaders, and a global champion of sustainable development and biodiversity preservation. Between 2010 and 2017, she served as President of WWF International, one of the world’s largest independent conservation organisations with more than 5 million supporters worldwide, and a presence in over 100 countries. Prior to that, Ms. Kakabadse was the Executive Director of Fundación Natura in Quito, President of the World Conservation Union (IUCN), and Minister of Environment for the Republic of Ecuador. In the late 1970s, Yolanda Kakabadse became dedicated to protecting the natural environment. In 1993, she created Fundacion Futuro Latino Americano, an organization dedicated to promoting the sustainable development of Latin America through conflict prevention and management. In 1990, she emerged onto the international stage when she worked for the United Nations in Geneva, and has served as a board member of several international organisations, including the Ford Foundation and the Holcim Foundation for Sustainable Construction.

You can find out more about which cookies we are using or switch them off in settings.

This website uses cookies so that we can provide you with the best user experience possible. Cookie information is stored in your browser and performs functions such as recognising you when you return to our website and helping our team to understand which sections of the website you find most interesting and useful.

You can adjust all of your cookie settings by navigating the tabs on the left hand side.

If you disable this cookie, we will not be able to save your preferences. This means that every time you visit this website you will need to enable or disable cookies again.

This website uses Google Analytics to collect anonymous information such as the number of visitors to the site, and the most popular pages.

Please enable Strictly Necessary Cookies first so that we can save your preferences!